*NIX operating systems are made up of three parts; the kernel, the shell and the programs. 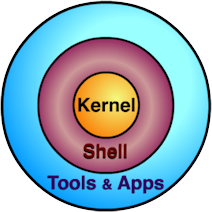 The Kernel is the core of the operating system: it interfaces and manages with the hardware it runs upon, allocates resources, time and memory to programs and handles the file system and communications, in response to system calls.

The Shell acts as an interface between the kernel, the user and other programs. When a user logs in, the login program checks the username and password, and then starts another program called the shell. The shell is a command line interpreter (CLI). It interprets the commands the user types in and arranges for them to be carried out. The commands are themselves programs: when they terminate, the shell gives the user another prompt.

Shell Scripting is not really a language but rather a collection of shell commands carried out in sequence in a special file, a script, to perform the user's program.